[WEBINAR] "Geodetic Forecast based on the 2017 Aries Ingress" 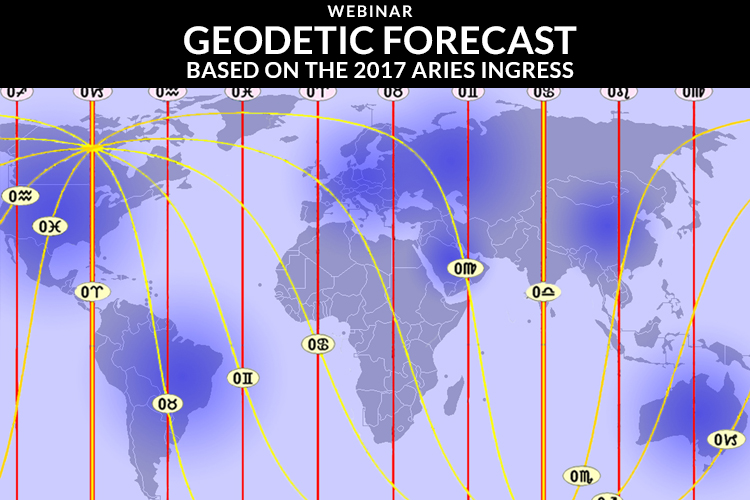 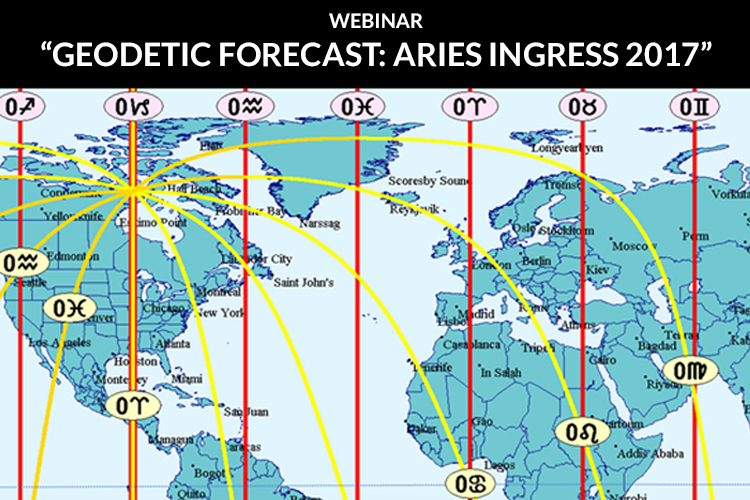 WEBINAR (2 hours):
"Geodetic Forecast based on the 2017 Aries Ingress"

NOTE: If you registered for the March 18th "ARIES INGRESS 2017 FORECAST" Webinar, this Geodetic Forecast webinar has replaced the 3rd presentation and is available with the Aries Ingress 2017 recordings.

Countries Discussed in this Webinar

The Astrological New Year, based on traditional sources,
starts when the Sun Ingresses into the Sign of Aries.

"...the true time from whence judgement is to be raised for the exact knowledge and predicting of future natural events in the Elements for any year, is when the Sun enters the first point or minute of Aries."
- William Ramesey, Astrology Restored, 1653

As forecast in the live webinar on April 2nd, many predictions are coming to pass including the following which have already happened:

Find out what the other predictions are in this presentation:

Q. I can’t attend the live webinar. Will I get a recording?
A. Register for the "VIDEO RECORDING ONLY" option and the video recording of the webinar will be emailed to you by April 9.

Q. Will I get a recording if I attend the Live Webinar?
A. Yes, ALL registrants will receive the video recording of the webinar, which will be emailed to you by April 9.

Q. I can’t use PayPal. Is there another way to register for the class?
A. Yes. Send me an email that you want to register and I will send you an invoice that will allow you to pay with a credit card (via Square payment processing).

Q. I'm not sure if I can use GoToMeeting.
A. Please read through the GTM Support page here for System Requirements. You can use the Web Browser App (Chrome) which will not require you to download anything to run GTM.

Email me with any questions about this webinar.

With a broad scope of political, economic, psychological, spiritual, and metaphysical knowledge, William Stickevers systematically explores possibilities about the future and how they can emerge from the present by weaving current secular trends, geopolitical factors, and mundane astrological portents.

With vast knowledge of both "real world" circumstances and spiritual truths, William counsels his clients with expertise few astrologers have on the economy and how it affects the client; psychology, the subconscious, and the psyche; metaphysical and transpersonal growth; and effective strategy according to the client’s natal chart, transits, and economic environment.

A counseling astrologer since 1990, mostly in New York City and now in San Francisco, William Stickevers is well versed in psychological, Horary, Electional, Medieval, and Renaissance branches of astrology, certified in Astro*Carto*Graphy, and worked with Alphee Lavoie of Astrological Institute of Research (AIR).  William has lectured for the National Council for Geocosmic Research (NYC, Long Island, New Jersey, and San Francisco chapters), American Federation of Astrologers (Los Angeles), the Astrological Society of Connecticut, and in Germany (Munich), Romania (Bucharest), and Japan (Tokyo, Osaka, Yokohama). In addition to being one of five astrologers recommended on Michael Lutin's Financial Astrology page, William has been invited by Kepler College, "We the People" and the Stars Online Astrology Event, and the META Center (NYC) to participate on panel discussions on the 2016 U.S. Presidential Election, the political and economic future of the U.S., and the Mayan 5th Age, respectively. One of the minority astrologers who correctly predicted the outcome of the contentious 2016 U.S. Presidential Election, William has an 87% accuracy track record for 98 of the Primary Elections and a 92% accuracy track record for the Electoral College in the General Election. William will be speaking at the United Astrology Conference (UAC) in May 2018 on The Economic and Political Future of the United States Based on the Barbault Planetary Cyclic Index.

More on William and his consultations, classes, and events at his website: www.williamstickevers.com.